When Christy Blake loses one of her two cats, Midnight, and her boss in what looks like a robbery attempt at her secondhand shop, Memories and Dreams, she thinks it’s the end of the world. But Midnight isn’t ready to go anywhere just yet, so he comes back as a ghost cat to help her track down his killer. Clearly there is a bond between Christy and Midnight that is too strong to be broken by something as trivial as death. 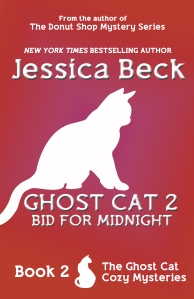 When Christy Blake goes to an estate auction, she plans to pick up a few things for her secondhand shop, Memories and Dreams. She gets more than she bargains for, though, when her ghost cat, Midnight, brings one of the late owners to her for help. Summer and her father were murdered, and Christy must solve the case to free the victim so she can Cross Over. But by doing so, will Christy lose Midnight forever?

Want to know when Jessica releases a new book?